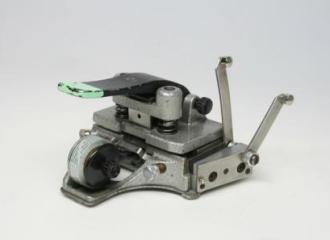 Why learn to edit film?
Because FILM IS FUN! Like cutting and taping things? So do film editors!
Ever wonder where those terms in your digital editing programs come from? Bins? Splices? Film editing!
Love old technology? So do we! I mean, look at this thing and tell me you don’t want to edit day and night on it:

Don’t believe the myth that film on film is expensive – we have dozens of old films you can cut up and repurpose into new work! The original mashups were made from bits on the cutting room floor.
(Bruce Connor knew what was up: https://www.youtube.com/watch?v=4FMjBtvsx2o His seminal film, “A Movie”, takes a critical look at the spectacle of cinema, in ways only found footage films can.)

What are we doing?
In this 2 hour workshop, we’ll show you the ins and outs of film editing – from cutting and splicing celluloid, to using the flatbed editors and viewers, to threading projectors and projecting your films. Whether you need a refresher course because you haven’t edited on film since the 70s, or you’re brand new to film editing – this free workshop is for you! All materials provided. Fun guarenteed or your money back!

Want to know more about film editing? Here are some resources:

Charlotte Taylor is a process. She is an experimental animator and the program coordinator/faculty of film and video production at a small college in Western North Carolina. Her research ranges from digital animation and handmade film to optical toys, and she is particularly interested in alternative forms of production and presentation. She earned an MFA from the University of Iowa and a BA from the University of Florida. Her work has screened at venues across the world, including: Ann Arbor Film Festival, MonoNoAware, Indie Grits Festival, Strange Beauty Film Festival, TIE, EFF Portland, FLEX Fest, and the Anthology Film Archives. She was the recipient of the 2012 Helen Hill Award from Indie Grits, for her film The Edge of Summer. She enjoys organizing and teaching community filmmaking workshops and is the Director at Mechanical Eye Microcinema, a non-profit organization dedicated to providing equitable community access to media arts workshops, resources, and screenings. Charlotte is currently working on a direct animation music video and an animated 16mm essay film about women in Belegarth medieval combat.