Stop Motion Animation – A 6 week course in ANIMATION – for adults!

Work with cut paper, clay, white boards and more to make your own stop motion animation! All materials provided!
Adults / Saturdays / 10-11:30am / October 8, 15, 22, 29, November 5, 12
Tuition: $135 Members /  $180 Non-Members – If you’d like to sponsor a student or if your student needs sponsorship, please contact us at mechanicaleyemicrocinema@gmail.com.
Led by Lisa Smith 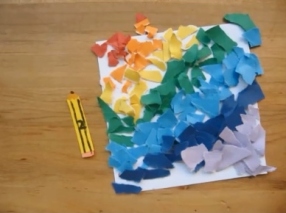 What are we doing?

Have you ever wanted to learn how Gumby & Pokey or Wallace & Grommit were made?  Do you like to doodle?  Or are you an artist who would like to bring your creations to life?  Work with cut paper, clay, white boards and more to make your own stop motion animation! All materials (digital cameras, animation stands, art supplies) provided.

Lisa Smith earned her MA in Film Production from the Ohio University School of Film, where she first taught Film History and Film Production.  Her production experience includes documentary, educational, television advertising and experimental/artistic film and video.  Her work has been screened at  the San Francisco International Film Festival, the Walker Art Center’s Independent Filmmaker Series and the Fort Lauderdale International Film Festival, as well as on PBS as part of “The Independents” series.  Her production credits include awards from the Academy of Television Arts & Sciences, the Academy of Motion Picture Arts & Sciences, and the Athens International Film & Video Festival.

Lisa has been teaching for the past 17 years, including stop motion animation, film history, and video production, as well as home educating her four sons.  She teaches math & English in the home school community, and conducted a children’s orchestra in the Florida Keys for seven years. Other Asheville area teaching experience includes Carolina Day School, Claxton & Ira Jones Elementaries, UNCA’s Super Saturday, True Ink and her own World Peas Summer Camps.  In 2012, she received the Teacher Innovator Award from PBS and the Henry Ford Museum for teaching stop motion animation.  She currently resides in Asheville, NC.