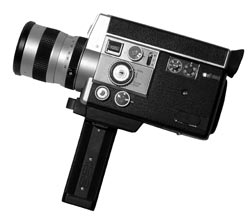 Make a short b&w movie on super8! No prior experience required! Film & processing included!
Youth ages 12-17 / 5:30-7pm /October 4, 11, 18, 25, November 1, 8
$135 Tuition – If you’d like to sponsor a student or if your student needs sponsorship, please contact us at mechanicaleyemicrocinema@gmail.com.
Instructor: Charlotte Taylor

What is Super 8?
Super 8 was the medium of home movies for decades. Launched at the 1964-65 World’s Fair, Super 8 was an alternative to 8mm film. Packaged in a light-proof cartridge, Super 8 film can be changed easily and quickly. Super 8 cameras were light, affordable, and often had auto features that made them the most accessible equipment on the market for those wanting to encapsulate family memories on celluloid.

Super 8 was succeeded by VHS (because popping in a tape is easier and faster than processing film and threading projectors), but continues to be an affordable alternative for music videos, experimental films, and independent filmmakers (because that image quality can’t be replicated!).

What are we doing?
In this class, we be using b&w Super 8 to make short (2.5min) movies. The class will cover storyboarding, basic cinematography and composition, as well as how to edit and project your films. We’ll also touch on double system sound (non-sync, separate sound design). Participants will learn about the history of the city symphony (portraits of places) and make their own city symphony inspired films! Each student will have both a digital and Super 8 copy of their film at the end of the 8 weeks. 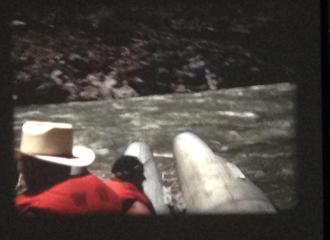 Want to know more about Super 8? Here are some resources:

Charlotte Taylor is a process. She is an experimental animator and the program coordinator/faculty of film and video production at a small college in Western North Carolina. Her research ranges from digital animation and handmade film to optical toys, and she is particularly interested in alternative forms of production and presentation. She earned an MFA from the University of Iowa and a BA from the University of Florida. Her work has screened at venues across the world, including: Ann Arbor Film Festival, MonoNoAware, Indie Grits Festival, Strange Beauty Film Festival, TIE, EFF Portland, FLEX Fest, and the Anthology Film Archives. She was the recipient of the 2012 Helen Hill Award from Indie Grits, for her film The Edge of Summer. She enjoys organizing and teaching community filmmaking workshops and is the Director at Mechanical Eye Microcinema, a non-profit organization dedicated to providing equitable community access to media arts workshops, resources, and screenings. Charlotte is currently working on a direct animation music video and an animated 16mm essay film about women in Belegarth medieval combat.