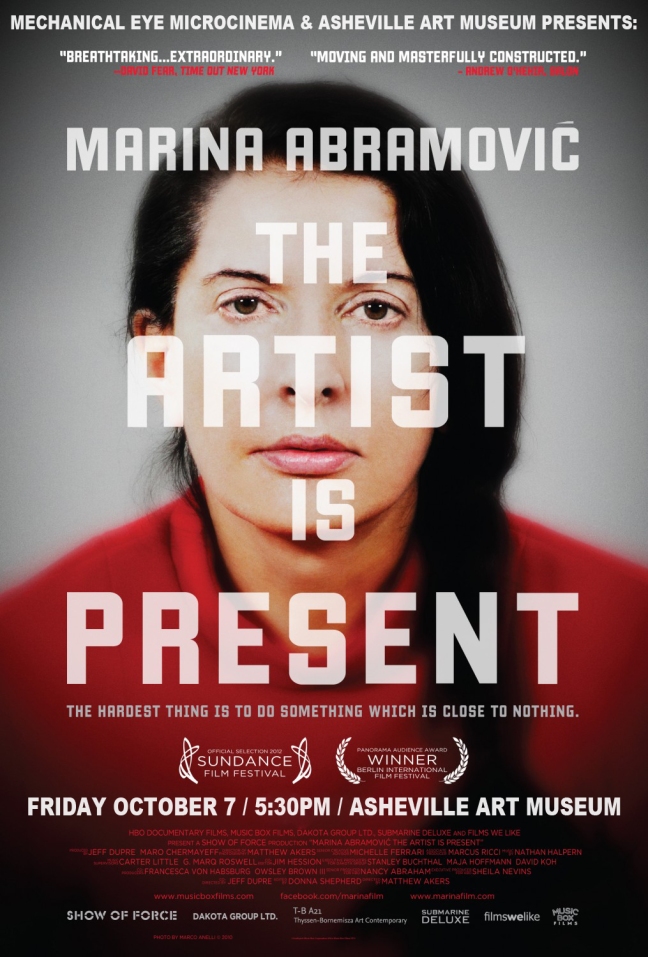 We’re so excited to team up again with the Asheville Art Museum to bring you The Artist is Present!

Seductive, fearless, and outrageous, Marina Abramović has been redefining what art is for nearly forty years. Using her own body as a vehicle, pushing herself beyond her physical and mental limits – and at times risking her life in the process – she creates performances that challenge, shock, and move us. Through her and with her, boundaries are crossed, consciousness expanded, and art as we know it is reborn. She is, quite simply, one of the most compelling artists of our time.

She is also a glamorous art-world icon, a lightning rod for controversy, and a myth of her own making. She is most certainly unlike anyone you have ever met before.

The feature-length documentary film, Marina Abramović The Artist is Present, takes us inside Marina’s world, following her as she prepares for what may be the most important moment of her life:a major retrospective of her work, taking place at the Museum of Modern Art in New York. To be given a retrospective at one of the world’s premiere museums is, for any living artist, the most exhilarating sort of milestone. For Marina, it is far more: it is the chance to finally silence the question she has been hearing over and over again for four decades: “But why is this art?”

Thursday, September 29th is marks the 4th year of our FILMTASTICNESS! Apparently, our new home is also having a big celebration… you know, in honor of us (just kidding – it’s the official GRAND OPENING of The Refinery – they really wanted to share birthdays with us)!

Here’s what’s going down at this shin-dig:

The event is free and open to the public. Light fare will be offered and alcoholic drinks will be available to purchase with 100% of the proceeds benefiting the Asheville Area Arts Council.

We hope you’re able to attend and welcome us and the arts in our new south slope home. Come make movies with us!

About The Refinery Creator Space:
The Refinery Creator Space is a place for artists and non-profits to collaborate, cooperate, and grow. Along with housing the AAAC’s operations, the 15,000 square foot facility is home to ten individual artist entrepreneurs and five community organizations; Asheville Darkroom, Asheville Makers, Local Cloth, Mechanical Eye Microcinema, Nick Moen’s The Bright Angle Ceramics Studio. Their presence in The Refinery will help us foster collaboration, innovation, and provide resources and tools for the greater Asheville community. The public is invited to get acquainted with this new resource and find out more about The Refinery, the host organizations and artists it houses, and to become a part of this collaborative community of creators.

We’re teaming up with the Asheville Darkroom to bring you: Guest of Cindy Sherman !!!

In 1979, Cindy Sherman rocked the NYC art world at age 26 with her “Film Stills.” The haunting photographic series appears to chronicle actresses in the midst of dramatic and evocative film scenes, but is in fact the artist herself posing as the different subjects. Hailed for her play on media and identity, the shy and reclusive Sherman almost always uses herself as the model in her photographs and always in disguise.
Today, at age 62, she is internationally acknowledged as one of the world’s most gifted and significant visual talents — in May 1999, ARTnews named Sherman, alongside Matisse and Picasso, as one of “The 20th Century’s Most Influential Artists.”

(Currently, The Broad Museum in Los Angeles is holding a retrospective exhibition of her work.)

Although Sherman’s work is collected by every major art museum in the world, she has proven elusive as a media personality. She is not a self-promoter and leads a quiet private life. Sherman rarely does interviews and never explains the meaning of her work. Fans, desperate for a glimpse of this art world celebrity at her 2003 opening in England’s Serpentine Gallery, could not recognize who they were looking for.

Enter her complete opposite — Paul H-O, a former artist-turned-opinionated host/creator of the public-access series, GalleryBeat. In the nineties, Paul’s weekly show developed a cult following, chronicling often-inexplicable happenings in the contemporary art world. Produced on a shoestring budget with help from Art in America magazine editors Walter Robinson and Cathy Lebowitz, the program was a labor of love, driven by a strong affinity for art and its creators.  By the late nineties, Paul had become a recognizable fixture in the art scene, picking up fans and detractors: artist Julian Schnabel, entangled in an on-camera argument with Paul, called the program “idiotic.”

In 1999, Paul learned that Cindy Sherman counted herself among his fans. At once, he set out to capture the ultimate prize in art world journalism — to tape a series of interviews with the elusive artist. Cornering her at an art gallery opening, Paul asked for her participation. Surprising many (including Paul), Sherman agreed. As he started the series of interviews, fun banter turned into harmless flirting, and harmless flirting turned into something more – Paul and Cindy were falling in love. Soon after they started dating, Paul faced a series of personal crises, including illness and bankruptcy. Cindy stood by him, providing her love and support. In 2001, Paul moved into her SoHo loft, becoming further enmeshed in her world.

Guest of Cindy Sherman takes an eye-opening look at what happens when a skeptical outsider finds himself romantically involved with the ultimate insider.

You don’t need cameras to make a movie!!!

What is a film bee?
Well, it’s like a sewing bee, except we’re going to make a film! Each month we’ll introduce a different direct animation technique, and provide you with all the necessary materials to join us in making a community cameraless film! We’ll project the film at the end of the hour, and will post it online so you can watch it whenever you want! Plus, you’ll have a fancy new filmmaking technique in your artist tool belt…

The film bee is free and open to everyone! All ages and levels of experience are welcome! Please bring your friends! Feel free to bring some good music or yummy snacks! Yay for film!!!

So, it seems we’ve been neglect in updating our news feed! Here’s what we’ve been up to in the past few months!!

Jason Robinson is a filmmaker and new media artist who makes single-channel experimental videos, animated gifs, and live performances. He is an assistant professor of Digital Art at the University of Mary Washington in Fredericksburg, VA. 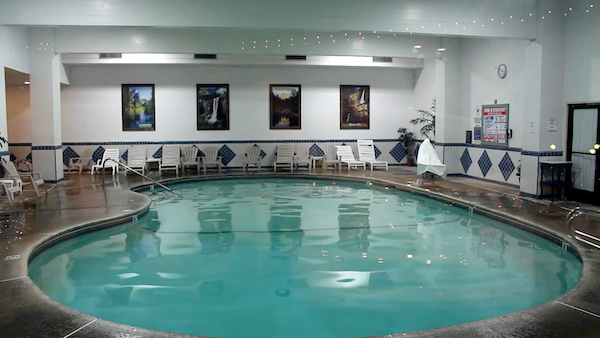 Inventive and wildly fun, NUTS! recounts the unbelievable true story of John Romulus Brinkley, a Kansas doctor who in 1917 discovered that he could cure impotence by transplanting goat testicles into men. From there, the story only gets more bizarre.

Mixing hand-drawn animated reenactments, interviews, archival footage, and a very unreliable narrator, NUTS! traces Brinkley’s rise from poverty and obscurity to the heights of celebrity, wealth, and influence. Along the way, he transplants thousands of goat testicles, amasses an enormous fortune, is (sort of) elected Governor of Kansas, invents junk mail and the infomercial, builds the world’s most powerful radio station, and generally annoys the heck out of the establishment.

Filmmaker Penny Lane (OUR NIXON) has skillfully borrowed a page from her subject – charming viewers into believing the unbelievable, building their trust and excitement, until the final chapter bares the painful truth and reveals the doctor for what he truly was. NUTS! reminds us that our love of (and need for) compelling narratives is exactly what makes us so endlessly susceptible to being conned.

FREE and open to the public!

“At the center of Chantal Akerman’s enormous body of work is her mother, a Holocaust survivor who married and raised a family in Brussels. In recent years, the filmmaker has explicitly depicted, in videos, books, and installation works, her mother’s life and their own intense connection to each other. No Home Movie is a portrait by Akerman, the daughter, of Akerman, the mother, in the last years of her life. It is an extremely intimate film but also one of great formal precision and beauty, one of the rare works of art that is both personal and universal, and as much a masterpiece as her 1975 career-defining Jeanne Dielman, 23, quai du Commerce, 1080 Bruxelles.” —New York Film Festival, Film Society of Lincoln Center

Fierce Flix is a summer camp for girls and gender minorities ages 8-16. Over the course of a week, campers will work in groups to write, direct, shoot, and edit music videos for the bands at Girls Rock Asheville! Each day, campers will attend video shoots, filmmaking instruction, workshops, and a mini-screening and Q&A with a female filmmaker. Throughout the week, campers are encouraged to work together, support each other, and foster one another’s unique creative abilities through positive reinforcement.

Nothing says fight or f-off better than glitter. Experimental animator and filmmaker Kelly Gallagher will screen short works and offer a Q&A!

Kelly Gallagher’s collage animations engage topics ranging from stories of personal histories, to feminist calls to arm, to legacies of radical resistance against white supremacy. After completing her MFA in Cinematic Arts at the University of Iowa this past spring, Gallagher currently teaches courses in media arts at Antioch College in Yellow Springs, Ohio.

We’ve had such a great summer, and can’t wait to share with you our plans for this fall!!!